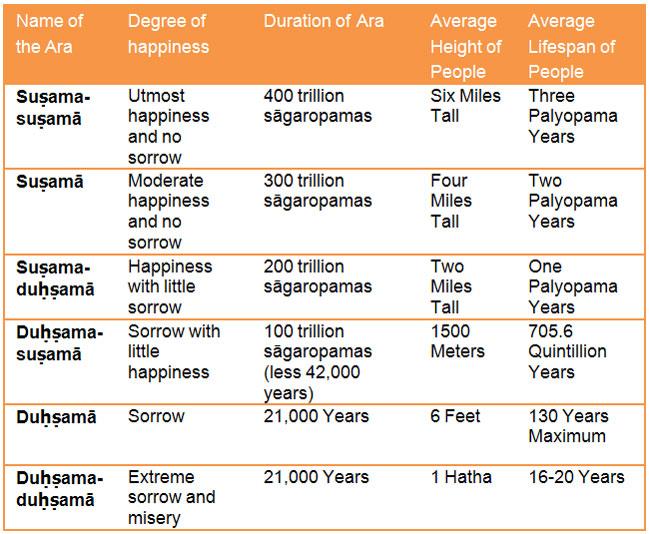 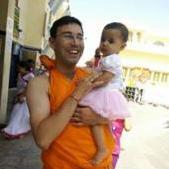 Currently, the time cycle is in avasarpiṇī or descending phase with the following epochs:

Suṣama-suṣamā: During the first ara of the Avsarpini, people lived for three Palyopama years. During this ara people were on average six miles tall. They took their food on every fourth day; they were very tall and devoid of anger, pride, deceit, greed and other sinful acts. Various kinds of the Kalpa trees fulfilled their wishes and needs like food, clothing, homes, entertainment, jewels etc.

Suṣamā: During the second ara the people lived for two palyopama years. During this ara people were on average 4 miles tall. They took their food at an interval of three days, but the Kalpa trees supplied their wants, less than before. The land and water became less sweet and fruitful than they were during the first ara.

Suṣama-duḥṣamā: During the third ara, the age limit of the people became one palyopama year. During this ara people were on average 2 miles tall. They took their food on every second day. The earth and water as well as height and strength of the body went on decreasing and they became less than they were during the second ara. The first three ara the children were born as twins, one male and one female, who married each other and once again gave birth to twins. On account of happiness and pleasures, the religion, renunciation and austerities was not possible. At the end of the third ara, the wish-fulfilling trees stopped giving the desired fruits and the people started living in the societies. The first Tirthankara, Rishabdev was born at the end of this ara. He taught the people the skills of farming, commerce, defence, politics and arts and organised the people in societies. That is why he is known as the Father of Human Civilisation.

Duḥṣama-suṣamā: During the fourth ara, people lived for 705.6 Quintillion Years. During this ara people were on average 1500 Meters tall. The fourth ara was the age of religion, where the renunciation, austerities and liberation was possible. The 63 Śalākāpuruṣas, or the illustrious persons who promote the Jain religion, regularly appear in this ara. The balance 23 Tīrthaṅkars, including Lord Māhavīra appeared in this ara. This ara came to an end 3 years and 8 months after the nirvāṇa of Māhavīra.

Duḥṣama: According to Jain cosmology, currently we are in the 5th ara. As of 2010, exactly 2,537 years have elapsed and 18,463 years are still left. It is an age of sorrow and misery. The maximum age a person can live to in this ara is 130 years. The maximum height a person can be in this ara is six feet. No liberation is possible, although people practice religion in lax and diluted form. At the end of this ara, even the Jain religion will disappear, only to appear again with the advent of 1st Tirthankara in the next cycle.

Duḥṣama-duḥṣama: The sixth ara will be the age of intense misery and sorrow, making it impossible to practice religion in any form. The age, height and strength of the human beings will decrease to a great extent. In this ara people will live for no more than 16-20 years. This trend will start reversing at the onset of Utsarpiṇī kāl.In utsarpiṇī the order of the aras is reversed. Starting from Duḥṣama- duḥṣamā, it ends with Suṣama-suṣamā and thus this never ending cycle continues. Each of these aras progress into the next phase seamlessly without any apocalyptic consequences. The increase or decrease in the happiness, life spans and length of people and general moral conduct of the society changes in a phased and graded manner as the time passes. No divine or supernatural beings are credited or responsible with these spontaneous temporal changes, either in a creative or overseeing role, rather human beings and creatures are born under the impulse of their own Karmas

There are no comments to display.